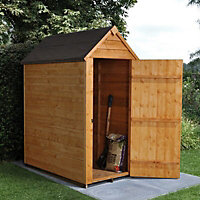 If you are looking for a neat and compact shed to store away gardening equipment, the Overlap Dip Treated 3x5 Apex Shed with no windows from Forest is an excellent option.

The walls were wonky - took quite a lot of shoving and pushing to get the roof on straight as the sides were at strange angles. None of the supporting batons had been cut to an angle to fit against each other, so the joints in the end panels were not as strong as they could be. Some of the cross timbers were also a few mm too long - not much but meant they stopped the walls joining flush. The walls are joined to the floor with L-brackets, as there is no bottom horizontal baton to screw through. This makes the join to the floor weaker, and means there is a small gap around the edge of the base.

The timber the walls are made from is very cheap - more like a fence - and the rain does soak through it when the wind is blowing. The floor also did not have enough support underneath (it's OSB), and feels dangerously bendy underfoot. I'm going to put something more sturdy on top before I can put anything heavy in it (which will cost more money!).

The door was at least 1cm too long, meaning that although it fit perfectly at the top and sides, when the shed was fitted together it scraped on the floor and needed trimming.

Luckily I am comfortable with woodwork so I was able to adjust things, and the price was good. However I would not recommend for someone who is not into DIY, or wants a hassle-free job.

Cheap and not cheerful

product looked ok, until I started putting it together.
Floor so thin and flimsy I had to reinforce it before I could stand on it.
Side panels were warped, so they did not line up correctly with the front/back.
wooden slats meant to cover joints were warped so badly, could not fit them on at all.

Bought this to store garden tools etc but only a small space, sturdy and stable if you add another layer on the floor. Good for the money, put it up In a few hours..!