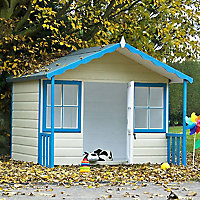 Shoddiest thing I have EVER brought , base cracked in delivery , windows smashed ,built backwards , not even treated properly ! Was patchy and flimsy currently on day 9 of waiting for some to collect it so I can get a refund even though it took 4 months to get here !!! Furious would not recommend even for budget it isn’t worth it

Let’s start off with the bad stuff. We bought this Wendy house in the middle of April, received the item in July. Poor customer services, it came eventually without any warning, it took over 7 hours to build, the felt for the roof is poor and cracked any time you bent it so having to replace it, also the ‘nails’ that were sent to pin it down are like safety tacks, had to buy a staple gun and staple it down instead. The wood for around the windows are terribly cut and most didn’t fit, had to glue them in place because the nails were so tiny. So the good things, everything came within the order, there was also extra of absolutely everything, extra windows, extra screws, etc. This is very good as it’s been built for 2 days and my children have already smashed a window in! The house itself it’s extremely sturdy, tested by our 9 months old German Shepard when he decided to run and jump onto the roof, lord help us! It has plenty of space for our two children and all of their outdoor toys, we floored it with the soft mats and there was plenty of room between the door frame to the floor for there to be another layer on top. The overall look of the Wendy house is beautiful, still to be tested in the rain but overall we are very happy with it, shame B&Q have decided to stop selling this item.

Dont buy unless your good at diy

Ridiculous amount of assembly required even the roof panels dont have framework on, even the gables are seperate panels, you have to fit the windows and doors and hang them all tidy, the door is warped and doesnt close without a gap

lovely playhouse, good quality. Don't be put off by the suggested 5 hour build time, took me and a friend 2 hours in the dark and rain,

Great house for our 3 kids

Bought this for our 3 kids and they love it. It is delivered by another company and not B&Q. It was delivered on a large pallet. My husband said one on the panels was slightly damaged but otherwise ok. It took my husband and his mate a weekend to build. It was time consuming and the windows were particularly fiddly but not unachievable! Seems sturdy and will hopefully stand up to my 3! The door doesn't seem to stay shut very well so my husband is going to get something else to help keep it shut, but otherwise great house. The windows open and it has air vents at the back. My husband laid slabs underneath it so it has a sturdy base.