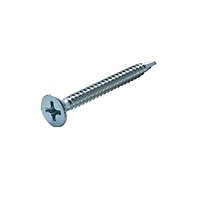 This pack of Phillips countersunk flat head internal screws are constructed from a durable steel, 38mm in length and come fully threaded. They're ideal for a range of DIY applications.

The Taming of the Screw

I recently extended the width of my chimney breast using gypframe C stud and plasterboard to accomodate a lowline gas fire.
I used drywall self drilling screws to secure the plasterboard to the metal stud. The first couple of attempts were not that succesful, with the first screw burying itself deep int the plasterboard and the second removing some skin from my thumb and forefinger. But after slowing the drill speed, the remainder of the product was completed succesfully. I believe the screws are first class and would always use them again in th future.