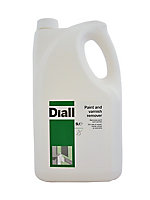 This paint & varnish remover is suitable For wood, metal, stone or concrete. An ideal solution for your DIY projects.

Waste of time and money

Ran out of Nitomors and made the mistake to buy this rubbish. It doesn't work. Waste of time and in the process it makes a terrible mess. Takes off one layer of paint at a time with so much scraping that you end up damaging the surface. Don't waste your money.

I bought this product to strip a varnished garden seat. i followed the instructions and it did an excellent job at a reasonable price

I have used this on a front door which had many coats of paint dating back to 1936. I used it old cinema seats from 1940s with varnish which had cigarette burns in it. I used it on old Iron door fittings *. The list goes on. I even clean paint brushes which have been solid with paint or varnish when I forgot to clean them - this too works a treat.

It does the job.

Follow the instructions. Then use steel kitchen scourers, from Poundland (without soap i.e. not Brillo pads) to remove the gunk after it has done its job. Repeat if necessary.

It seems safe, and a lot less stressful than using the old style caustic Nitromors and is a LOT cheaper than the new style Nitromors.

Requires no real effort and not much elbow grease. Give it time and let the science do its work.

* Caveat, I tried it on a very old radiator and it didn't really work. But it has been great with all my other projects.

As you can tell I love this stuff and I am about to buy another 5 ltrs :)

I lathered it onto my doors. Left it on for hours. Then the next coat for even more hours. Doesn't do the job. Doesn't do any job. Don't waste your money.

I did a lot of looking around for a paint stripper. The last time I used such stuff was many years ago with Nitro Mors which has since lost it's active ingredient - as has every other paint stripper on the market so no more paint it on and wash off with no effort.
So, having found just about every paint stripper on the market they all came with horror stories about how useless they were. However they also came with stories about how well they worked if you followed the instructions! As this was the cheapest I could find I decided to take the plunge.
My project was an old bench, so plenty of surface area and fiddly bits which were hard to get to. It had been painted with some unknown paint which looked awful and had started to peel.
The instructions are pretty straight forward. Daub it on and leave it for an hour. Then daub on another coat and leave that for an hour. It's then scraping time, but not like you would for removing wallpaper, this is more like shaving with a large enough flat scraper. Contrary to popular belief you can't just wash this off with a hose!!!. Needed an element of force but the paint came off easily, to my relief. Scraping between slats was difficult but it came off. There were a couple of bits which didn't but a second process of painting and waiting had those removed the following day.
It left a bit of a sticky residue but the final part of the process for me was to Jet Wash it all down which cleared everything away nicely.
A couple (maybe 3) coats of Teak Oil later and the bench is almost like new.
Very pleased.