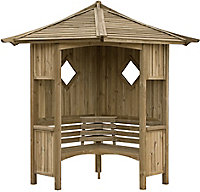 Arrived with no instructions.

This product is a different size to the advertised sizes on the B&Q website it is 1270mm not 1730mm a big difference,

A good solid arbour that will get plenty of use however I would say slightly over priced for what it is and due to the quality of the pre made sections, e.g more care could of been taken when making the roof panels and sides to avoid splits due to carelessness with the nail gun. The instructions said 2 person assembly however I managed to build it alone with the help of 2 clamps in around 3hrs. The build was straight forward but early on I noticed a twist in the wood that was gonna cause issues getting things square later on so left a few screws loose and used brute force and the clamps to pull things in to line before going back to tighten things up. If painting multiple colours I would highly recommend do it before building. After building I also ran some external clear silicone down the sides of the roof panels to help waterproof it before attatching the roof trims.

Printed instructions were actually not too bad if they were read aloud two or three times. Pictures were a bit odd in places but able to be worked out.

Assembly-wise, preformed pieces came with gaps and misalignments which had to be taken into account when assembling the rest of it. Quality of wood was visually tolerable (a couple of splits need filling and there are a few rough edges to sand off - nothing serious) but it was inconsistent in texture, meaning the drill and screws went through effortlessly in some places but hardly at all in others, so even screwing the bits together took additional time and energy whilst we tried to make suitable holes. Seat backs just plainly did not fit together and needed to be trimmed where they had to meet in order to sit correctly. Corner seat back had to be partly dismantled (removed top and bottom slats and reattached later) to screw on as required. Two of the roof edge covers needed trimming to fit otherwise they stuck out too far.

Half-way through the job, whilst in B&Q for other things, we went round to visit the display version of the arbour just to make sure ours looked vaguely the same, but their one had quite evidently not been finished correctly, so we're glad we didn't pay out for the assembly service if it produces no better a result than our own efforts.

However, having said all that, we're done constructing and it will be lovely to sit in it. Plenty of space inside the roof for a rechargeable light on a hook if you wanted. We did not screw down the shelf/lid of the corner back, as the inside could be used as a little storage space - you'll see what we mean if you do it. We also think we will glaze the diamond windows with acrylic and find some stained glass effect window clings to "pretty it up" a bit. We'll also top up the wood treatment with a good preservative, but we don't want to paint or stain it as the colour is good.

Would we recommend this product? Not unless you are (a) quite experienced at this sort of thing and a first class wood-wrangler - you're going to have to apply some weight and strength to force it all together; and (b) oblivious to the sensitivities of your neighbours as you screech various profanities when the wretched thing does not come together as you might have wished. Good luck!

Down at the sunset grill

Once built, it is very sturdy and good quality. I painted it with two coats of Cuprinol Old English Green and Cream and it needed 3 tins, two green and one cream. The cream might need a third coat but I'll wait till the summer now. The DIY is not for the faint hearted. My husband recommends a power screwdriver, a good drill and he used a clamp when the sides did not marry with the central upright. He also had to saw off some of the roof support as they were half an inch out and wouldn't sit on the sides. Despite these difficulties I would still rate it 5 stars as we are really pleased with it. Opened the prosecco to toast the completion and look forward to many nice evenings with the BBQ, watching the sunsets.

I checked out a lot of arbours before deciding on this one as it has many good features. The corner design makes it cosy to sit in and the shelf is useful for drinks. The design is attractive and it has just the right balance of cover and openness. However it was a long job to assemble it and needed some "handyman" experience, as well as 2 people for a lot of it. My only criticism is I find the roof excessively high which makes it stick out rather in the garden, so it could be a bit lower and there were a few small splits in the wood here and there, but overall a good buy.