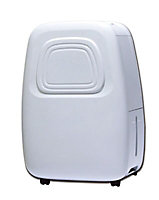 This Blyss 16L dehumidifier is ideal for removing excess moisture from medium size rooms and controlling damp and condensation. With it's 2.8L capacity tank it is capable of extracting up to 16L of water per day, and features an automatic shut down to switch off the machine when full. Other features include a carrying handle, LED display and wheels for easy manoeuvrability.

This dehumidifier is great!

I brought three years ago, it's still going great & consistently renoves a tank full every day! Me only gripe is its a little noisy, but it does not take long to get use to!

Been a god send works brilliant and silent compared to others.

A bit tempremental at times

It was a bit tricky to set up, it felt more complicated than it needed to be, I've had sevral dehumidifiers in the past and this one seemed to take a long time to be ready to work. Sometimes after I've emptied the water tank it'll not start to run again. I would expect the water tank to have approx. the same amount of water in it each day but sometimes it's full and at others empty - it's in an empty flat so the conditions shouldn't vary that much - but they do!

Irate of Reading - 2 years ago

Just bought this Blyss WDH 316DC, staff in store couldn’t tell me how long the guarantee is so had to wait until I got home to google it! ONLY 12 months!!!! For the price that is deplorable, I'm considering returning it. I was expecting 5 years, 2 year minimum.

bought this machine aprox 4 years ago has done a great job of keeping my home dry as we were suffering with bad condensation to point mould would grow in places, when got this home & set it off it showed humidity level of 75% in the house which was obviously the problem, so set this to 50% & it ran very hard running almost continuous for good few days until it got the level under control, once it got it down to that it'd just keep switching in & out as & when it ddected the level of moisture was higher, set to 50% it's typically cut in at aprox 53% & cut out back to idal once it dropped down to 47% which worked great, have had this machine running 24/7 for the last 4 years doing a great job, only downside I can say is the machine can be noisey when it's pumping/clearing the moisture, found a lot of this was the pull out water tank used to vibrate about a bit so a lot of this was cured by wedging a bit of cardboard in the side to make it sit tighter, none the less this machine has done a fine job until recently we had a power surge which seems to have hit the machine as it appears to be all confused & once it starts pumping it cuts out the fan & everything showing defrost symbol on screen for few seconds & then cus back in repeating the process no longer able to draw any moisture from the air & have checked that there is no leaks & that it isn't iced up, have also tried turning it off fully for 24 hours to see if it's a fault that will reset but not to be, the surge has obviously done some terminal damage, but all in all not a bad machine