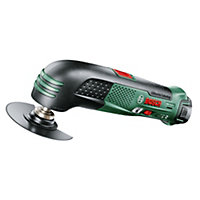 Unfortunately does not deliver

I've had this for almost a year now and used maybe twice. Originally bought to cut through some rusted screws, but also used for other small cutting jobs (plastic, wood). This tool never fails to disappoint. It seems to have good power and the ergonomics are great but it just doesn't cut! All it seems to do is vibrate violently and make A LOT of noise when cutting through anything. For that price I would get either a proper angle grinder or a dremel tool, depending on the job.

Does what it says on the tin

The first one of these that I bought appeared to have been used when I took it out of the box. I took it back to B & Q, and although we couldn't categorically establish whether or not it had in fact been used previously, they did replace it. There isn't much to say about it other than that; I haven't used it extensively, but as far as I've used it, it's performed adequately and I haven't had any problems with it. If I had to be really nit-picky, I suppose I'd cite the fact that the battery can sometimes be quite hard to remove, but other than that, it's a Bosch, so there was never much chance of it being sub-standard.