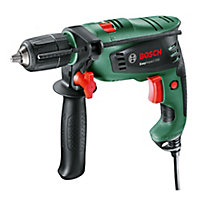 This impact drill is easy to use and allows for effortless drilling in all materials, including concrete.

I purchased this a week ago, this was a mistake, very diffcult to use when the drill bit falls out. Took to back for a refund.

I bought this product due to
The brand name. I am sorely disappointed

The chuck jaws do not grip the drills! Very poor.

I purchased this drill from B&Q because I wanted a light drill with a screwdriver facility. There were other drills that were cheaper, but I chose this for the Bosch brand. It is an utter disappointment as a drill - it says the twist chuck has an 'auto lock' - whatever that means it does not grip the drill tightly enough, so that often it comes out in the material being drilled or the drill bit slips further back into the chuck jaws. Terrible. It works ok as a screwdriver though & that's the only reason I have not returned it.

Worked initially very well. The chuck keeps allowing the drill bit to relax under heavy work load and then spinning the drill bit. After 3 drill bits ruined binned the drill.
You get what you pay for.

I bought this product 2 years ago. I love it. I can use to anything at home. Very usefull at home.