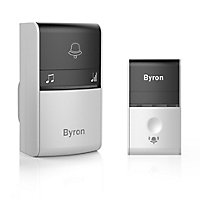 Never miss the postman again with this Byron black and grey wireless door chime set. Its battery free kinetic push and plug in doorbell with 16 melodies to adapt the chimes and volume according to your tastes and needs.

Don’t even bother to buy this doorbell, absolutely useless, it doesn’t work at all.wireless bell not ringing/not reaching monitor wirelessly at all.melodies are horrible sounds, sound is very deep/loud, it’s just not normal for doorbell to ring like that.took for the refund the next day.

The button needs to be pressed twice for it to work at all ... seeing as no one is going to know that, this will never ring! Also the sound is terrible
Quality. For one of the more expensive sets this is awful.... taking it straight back for a refund

Igor the great - 4 months ago

Although this item on the face of it is a product that "rings all the right bells" easy to install and set up, but if you require it to operate more than 4 meters away from the front door then forget it. It states it will operate up to 100 meters, and that is something it will not do! It has a great selection of musical tones though.

Taking it back for a refund!!