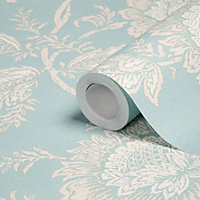 The soft and organic shape of this paper's motifs and its neutral colourway make of this a very easy to combine wallpaper design.

Just put up this wallpaper and it looks fantastic, in fact my missus looked and said wow, I think she likes it!!!!

I was worried after reading the review left but found none of the issues stated, I checked paper witch stated textured and so mixed paste for textured paper and it hung perfectly no rips and matched correctly throughout so feel issues with other review was down to wrong paste mix making paper too wet

This is one of the worst wallpapers we've bought in the last 30 years. Usually, the more expensive papers tend to be higher quality and easier to hang. Alas, this one was incredibly easy to crease and once it's there, you can't get rid of it, even after hanging (had to discard three drops because of this, amid much cussing and swearing). Pattern would get out of sync after about 1 metre. Colour was starting to come off when wiping off excess waste. Had already taken one roll back to B&Q as it was faulty. At nearly £20 per roll, it ain't cheap either. Save your money and avoid the frustration; go for something else instead.