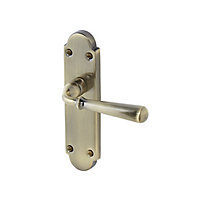 UK standard door handle that worked fine for me. Easy to install, and smart looking.

I too was worried by the previous review but could not see B&Q continuing to sell them if they were indeed faulty.
We have just replaced 11 doors and fitted all 3 varieties of handles to our doors with no problems whatsoever.
The finish is smart and they look lovely on the doors. So pleased we bought them.

Was a bit concerned when reading the other reviews so just bought one to try. Works just fine on our sitting room door so will now buy more to replace the ones on the other internal doors. My only gripe (and hence the four stars and not five) is that the screws are slotted and not star shaped (Phillips type).

Bought when first out and pointed out design fault.
The turn stops on the handle limit the turn on the tubular latch, so its impossible to open the door.
Latch requires 50 degree turn. Handle turn is close to 40, so not going to work.
Reported this in demo to site team who agreed inherent fault.
Head Office were supposed to fix with vendor.

Now some 6 weeks later, same problem exists. Box says these are made by Kingfisher, but they can never have been tested in fitted situation.

If you buy one, only solution is to set latch inset in door pillar about 4 mm deeper than should be necessary.
Looks ugly workmanship,
Until B n Q fix this, and tell us they have, I wont be buying anymore!