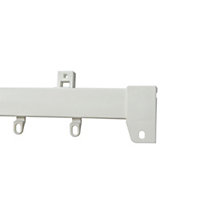 We purchased three of these rails without seeing the reviews - desperate waste of time and money. The rails are flimsy, poorly made and inadequate.

bought this instore so did not see reviews it is absolute rubbish and not fit for purpose. With the amount of bad reviews why is it still for sale! The instructions are not clear at all very dissappointing product.

Curtains nicely washed and ironed . . . one hook inserted, and the adjacent fixing popped out . . . hook removed and fixing remounted . . . all 22 hooks on a super-lightweight cotton, unlined curtain carefully located . . . a gentle pull on the ridiculously short cord and . . . the whole shebang is on the floor. Not fit for purpose. Will be returned to the store tomorrow along with a printout of this review.

I bought this yesterday. The clips which hold the rail to the holders aren't strong enough. They twist and don't secure the rail well. The cord is weak and stretches. The central fixing for the cord cannot be screwed tight enough to prevent it from moving along the rail as you open or close the curtains. It is described as 'heavy duty', but is really flimsy and inadequate to handle anything other than very light curtains.

Not fit for purpose

We bought this own-brand curtain rail because it was the only one in our local B&Q store that was the right length. Normally we have purchased Swish tracks - indeed we were replacing a Swish one that had been in place for a number of years. A problem had developed with its cording as the result of a large panicking dog who pulled the curtains down the first might we rescued him.

The first issue was that there was a cord at each end, not one at one end opening and closing both curtains. This was not stated on the outside of the packaging. One major reason for having a corded track is because one end is difficult to reach.

The new one was an absolute pig to put up and took ages; the fasteners were a loose fit in the wall brackets and you had only to turn aside for a moment for one of the fasteners to ping out. Any person fixing it would need at least six pairs of hands. It seemed poorly designed, flimsy and ugly, and the track supports and their shiny screws were clearly visible - a major "no-no" as far as we were concerned and quite contrary to the neat Swish cover-up.

A few days later after my wife had shortened a pair of new (non-heavyweight) readymade curtains to the right drop length, she put them up and tried to close them gently with the left-hand cord. It didn't pull easily and then the whole track sprang off the wall and landed on the floor.

We were so angry that we removed the curtains, gathered all the components together and returned the rail to B&Q the next day as not fit for purpose, asking for our money back. We have restored the old Swish rail and got round the original cording problem by simply not putting it back. We will draw the curtains by hand!

Annoyingly the B&Q rail sat lower in its too-visible supports than the Swish rail and thus the carefully measured curtains are now too short. My wife has remedied this by hanging them from the central level of their three-tier pencil pleat tape but this means that if the curtains shrink in the wash she will have less leeway to deal with that and may have to unpick all the work.

If we could award no stars, we would.