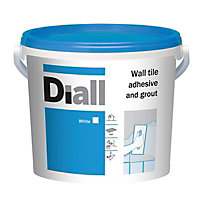 Convenient but Not Quick

I needed a small amount of grout and adhesive for tiling a cooker splashback. I've used separate adhesive and grouting mixes in the past without a problem. I found this ready-mixed bucket for about the same price as the two separate dry items so I bought it thinking it would save me time. Big mistake. The adhesive went on OK but it takes 24 hours to dry according to the instructions. It doesn't seem to set or go off like normal tile adhesives. After 16 hours, when I started the grouting, I accidentally dislodged a tile to find the adhesive was still soft behind the tile; the only hard areas were the bits exposed directly to the air. I replaced the tile and carried on grouting very carefully. As a grout, the mix was again easy to apply, but when cleaning up, the stuff on the surface of the tiles goes hard reasonably quickly; the stuff in the joints remains very soft and is easily collected by a grout sponge, so it took ages and a couple of re-applications to get the balance right between a reasonably clean surface and a fully grouted joint. Overall, it took me far longer to get this right than if I'd used conventional products. And I'm not yet convinced that the tiles will remain in place before it's all finally set. Only use this stuff if you have a week!

The Tile Master - 2 years ago

Two days after I fit the tiles I accidentally removed one tile by hand! It was easy to scrape the adhesive with my finger! This adhesive is not stronger than cheese!

This works ok? Not sure about the other terrible reviews but worked fine for me.
It's not as good as some of the bigger brands but it's also not as expensive. It worked for me with a reasonable result.

Bought this in haste regretted it. Hoped to save money and time by not having to use separate grouting product. Big mistake - too good to be true.
A terrible adhesive. Powdery and dries too quickly, very hard to work with. Following day several tiles had popped off.
Straight in the bin so never used it as a grout.

Waste of time and money

Very poor adhesive with some tiles falling off after a day when grouting, would not buy again or recommend ,