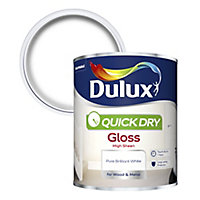 This Pure brilliant white gloss wood & metal paint has been specially designed to give a durable and long-lasting finish on a range of surfaces. Simply apply 2 coats with a brush or roller and leave for 6 hours to dry - a great way to give the surfaces additional protection. Covers up to 16 m² per litre on average.

At B&Q we want you to be satisfied with your colour selection. Not all monitors will display colours the same and paint tins may not show the same colour as your walls do in natural light. We therefore recommend you order a tester pot online or pop in store to pick one up so you are sure that this is the right colour for you.

Really covers well - and pure white. Went on so well.

Decided to leave this review because of the number of poor ratings for this and because I've found this such a better paint to use than usual oil-based glossed.

My understanding is some years ago there was a change in what could be added to oil-based glosses and as a result they now yellow much quicker when not exposed to high levels of natural light. I think this paint is far superior to these oil based alternatives.

- It's water based so hardly has any odour and it's much easier to clean brushes or off your hands.

- It dries extremely quickly, touch dry after about 20 mins.

- It's not as thick so easier to avoid drip marks.

- You may need an extra coat compared to oil-based, although there's only been one area where I've needed to use 3.

- I think some people would feel this isn't as high sheen or 'glossy' as oil based paints. Personally, I find the difference negligible and think it's far out-weighed by the lack of yellowing.

I bought this paint to gloss the coving, door frame and skirting, even on top of primer, and after two coats still not glossy, will need to get something better than this, will never buy again

We painted our windowsills with this paint. Lovely finish, quick drying, no awful paint smell, that normally lingers for days.