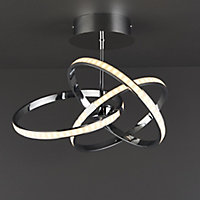 Unfortunately, we no longer stock this item.

Bring some elegance into your home with the Endor ceiling light. The circle shaped arms and silver effect give the light a modern and luxurious twist

Bought 2 for my lounge. Had an electrician fit them but were super quick to fit. Definitely needs a dimmer switch though as are extremely bright

So easy to fit and looks amazing , definitely use with a dimmer though as it’s really bright on full !

Bought and fitted within about an hour, including a dimmer too. Although replaced a similar halogen light. Did not use the provided connector block since there was already one there. There is no facility for the earth wire, so I left it in the connector block.
Well packed in a double box, although I avoided those that had been opened in store in case they were damaged. Looks really nice and with the dimmer it can range from a warm light to super bright.

Easy to fit great looking light. was amazed when i turned it on as it was like someone had put a small sun in my bedroom, dimmer switch may be needed :-)