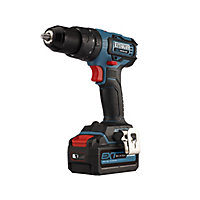 Thoroughly impressed! Feels good in the hand. Battery charged super quick. Used it on and off all day, and the battery is still going!!! comes in super robust box, like they all used to many years ago. The box clips have metal latches

I really wanted this to go well. On paper it looked great. brushless motor, metal chuck and a clunking 4ah battery to go with it. I thought this would be a great replacement for my Bosch, but it was not to be. Before its second charge the chuck started to jam and make a hideous grinding noise when I tried to tighten bits in (both manually and on the trigger). I thought at first it might have been something stuck, as it stopped doing it after a bit, but then it did it again and again. Hoping this would be just an unlucky one (after all every company has a wrong'un from time to time), I went for an exchange (B&Q happy to do so). Second time out and the grinding chuck's back - sometimes. Oh and one of the drill bits in the multibuy was bent, as was the bit holder. I was prepared to live with that, but as the whole lot's going back (again) I think it's time to give Erbauer a wide berth. Such a shame.
Quality: 1 star
Value for money would be 5 - if it worked. It doesn't, so 1 star.
Ease of Use: 5 star

So far so good

Just opened the package and following instructions, popped the battery on to charge. It is making a noise, not loud, sounds like a mini ventilator- is this normal? Anyone else experience this?

So far so good

It's arrived ok, all bits in box, following instructions I have popped the battery on to charge and the charger is making a noise. Not loud, sounds like a little mini ventilator- is this normal? Is it meant to make a noise?

I bought this drill to replace an older, cheap, drill that had given up the ghost. This drill is miles apart from the one it replaced. Even driving screws is a breeze, which was always more pain than it was worth with the previous drill. It manages to deliver the torque without putting much strain on your wrist. Don't even realise how hard some of the screws would have been to drive until you try doing one with a manual screwdriver! Overall very impressed and wish I'd bought it sooner.