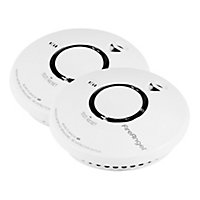 These FireAngel smoke alarms use Thermoptek multi-sensor technology which pairs the the very latest in optical sensing with thermal enhancement, and when compared to single sensor alarms reacts to fire in under half of the time. They come with a sealed for life battery, meaning no need to replace, and is simple to install. These alarms cannot be connected to other alarms in your home.

As per the title, only managed to get 3 years out of a 10 year fit and forget unit!

Deserves better than other review scores

I bought a twin-pack of the FireAngel ST-620 smoke alarms in August 2018. I had to replace the base from my ancient and larger alarm with the smaller FireAngel one, but I was able to reuse the existing screw holes, so an easy job. I have never had any false alarms, unlike my old units which went off with a 'smoke' from the kitchen, and the a new units are modern and stylish.

However, like others, one of the units started intermittent chriping in February 2021 - a low battery warning despite the alarm never going off. I read lots of reviews from people with the same problem, and discovered that other brands using a 10 year non-replaceable battery suffered from the same issue. I also read of people having difficulty getting replacements or even a response from Fire Angel, so I was somewhat concerned.

I sent an email to FireAngel giving details of the problem, the batch number and advised that I had the original receipt, but I didn't send it or even a photo or scanned image. I got a response within 2 days advising me that they had posted a replacement, which arrived within another 3 days. In my case, the response from Fire Angel was excellent although I'm concerned that the second unit from my twin-pack will suffer the same fate in the not to distant future.

Can’t replace the battery so have to renew the whole unit. Sustainability? Lasted 2 years not 10 as ‘guaranteed’

One has packed up after two months. Keeps on going into full alarm.
Took the issue up with Fire Angle as it has a warrant, they where not interested at all.
Buy a better brand as these are pound shop junk