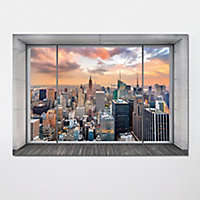 The GoodHome grey paste the wall XXL mural decor 175gsm is easy to hang due to its non woven base. No wallpaper table is required, the glue is directly applied to the wall.

We bought an almost identical design from a well known online retailer and received an awful quality product contrary to the many, presumably fake, 5* reviews.
This product is significantly better quality. Putting this up was of the expected difficulty, it's not a trivial task, but it's not too difficult for an average DIY enthusiast. The wallpaper is robust and thick. The surface appears to wipe clean and the creases that were present after unwrapping the product pretty much disappeared once the mural was applied to the wall.
I was very impressed with the product. Note that it does not come with wallpaper adhesive.

I was so impressed with the quality! It comes in 4 sections and is numbered on the reverse for ease. Took less than an hour but lost the bottom due to walls not being tall enough go full view. I love it!