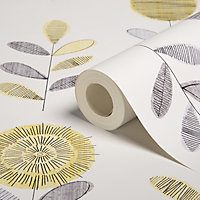 Bright and modern floral wallpaper design, in grey and yellow.

I saw this paper and knew it would match my new bedding perfectly. You have to match the flowers by eye as there is nothing to match it too but don't let this put you off, the paper is beautiful and really brightens up my bedroom.

Firstly the pattern is amazing, just enough detail without over powering the room, unfortunately this is where the positives end.
Having done my own wallpaper before I assumed it was something manageable, I was wrong! The quality of the paper is very poor, feels thick when dry but as soon as you paste it it is thin and very easily ripped. It also marked easily when folding. It shows every imperfection so only use if your walls are smooth and straight. Paste quickly dried and trying to keep it straight on the wall was hard as it stretched and creased at the slightest pressure.
Corners and edges were a nightmare, and in the end I decided to paint the wall around the window as I'd lost the will. I specifically bought a decorators roll knife to aid cutting however it just resulted in the paper tearing, as with another review I resorted to scissors.
As the pattern did not go to the edges it was difficult to match as you have to guess whereabouts it lines up.
I can honestly say this paper has put me off attempting to do my own wall papering again.

This product is OK

Love the pattern and I found it easy to pattern match as there is a bit of tolerance with the pattern not meeting the edge of the paper,
The quality is thin and difficult to handle. It absorbs the glue and stretches making it difficult to keep square. It's certainly not easy to hang and took me about an hour to hang one piece and get all the bubbles out. Luckily I was only doing one wall. I've used a lot easier paper but you get what you pay for and for the price I'm pleased with the result

I was looking for something that would keep the room light and I’m glad I chose this, I love it! For £10 a roll you really can’t go wrong!
I used a laser to keep the pattern right as it’s tricky to get level as the pattern doesn’t go over the edges.

Easy to hang. I am very happy how it looks brilliant