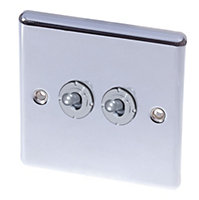 For your safety, electrical products must be installed in accordance with local building regulations. If in any doubt, or where required by the law, consult a competent person who is registered with an electrical self-certification scheme.

This item was bought as a replacement for an identical switch I got for the kitchen in early 2007. One of the toggle switches had become loose on the old one, and just wobbled about; it still worked but like I say, it's internal clip had broken making the toggle wobble.

I have never had a light switch actually break on me before now, so I was disappointed this one would have done so. This is why I have only given it four stars.

My decision to get an identical model is based on the fact I I really like the external design, but the internal workings should have lasted more than seven years I feel. It is very reasonably priced and easy to fit, so not a problem should you go off the design and want to ring the changes