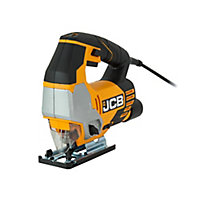 I bought one just over a month ago,only used it to cut pallets up for firewood,the blade fixing part,was iffy, at first the blade was hard to remove,so I greased it it,it was better,however when I went to put a new blade in it was faulty again,took it back and I purchased another, hope this one is better,it’s got lots of power and is comfortable to use,I only bought it as I’ve had one of there petrol grass strummers for 12/13 years it’s been excellent,I think the blade release part could be better designed though,like other ones where you just pull lever back,better idea

Great value...cheapest 800 Watt available...so much more powerful than the rest of the under £50 offerings. Comes with 1 wood and 1 metal blade.