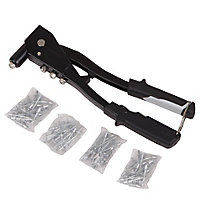 Used it for 1 rivet and it broke

Literally 1 rivet. The worst purchase I have ever made, and I bought a boat once.

How can a massive chain like B&Q not sell more than 1 type of pop riveter and the one you do stock (this one) is useless!!!! Jams and is a pain to operate anyway. Very very poor

Did the job, but with some issues

I've used more expensive riveters before, but wanted a reasonably priced one to rivet some signs to a backing panel. It did the job, but with the very first rivet the pin jammed in the jaws and needed quite some effort to remove it. It happened again occasionally but did seem to ease up after I'd used it a few times. I used 7mm rivets which it handled okay, albeit needing some strength the compress the handle.

Not a good build