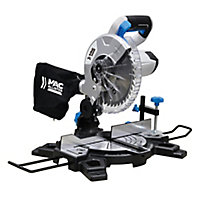 Powerful 1500W compound mitre saw designed for comfortable use and precise cuts every time. Finished with an aluminium base, providing durability.

Brought this to replace a heavy old saw,that was getting cumbersome to bring to diy jobs.
Done a few cuts seems ok I've not checked outright accuracy, but it's perfectly ok for general DIY & light trade use.

Does the job and then some

I bought this because I needed to cut half a dozen mitres. That was it. SO I didn't see the need to spend a lot of money. Since then, I must have used it most days in the last month as it is so versatile and capable of taking the hammering I'm giving it. I'm even using it to cut up tree branches in order to get rid of them easier.. OK. I know it's not what I'm supposed to do. While my wife was initially scared of the idea of having one, having seen lot's of episodes of Casualty, she has taken to it like a duck to water and is talking about buying a sliding saw to keep this one company. The build quality is fairly sound for the price, not flimsy, but quite light and very easy to put together. I did change the blade over straight away for a better one, but that aside it is a good machine for the money. Don't expect too much from it, but in terms of cutting mitres and some joints, it's terrific.

bought this to do my decking, buy cheap buy twice. It fell apart within 6 hours of use. The screws holding the gearing fell out and, if the blade guard was not on, it would have come flying off. It also destroyed the decking incase cutting. Never again will I buy anything from this brand

I bought this today to process old pallets into kindling for my woodburner. Great no more handsawing for me!

I brought this because I was fed up of using my skill saw, it cut 4x2 and 6x2 with ease. Been checking the cuts every so often with a square and it lines up perfectly. Only been using it for a couple of days but very happy with my purchase.