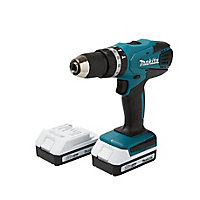 Okay for the odd DIY job

I have had this for over a year and to be honest it's joke to have Makita written on it. I know it's a relatively cheap drill but you dont even get what you pay for here. Apart from the odd DIY job, drilling in wood etc it's actually quite weak and useless. The most obvious thing you realise how weak the torque is, unlike most drills you are forced to use the specified torque settings it struggles and failed to properly screw in wood screws. It has a hammer setting and I don't know why, even using a quality but it's useless when it comes to masonary. Be warned this is fancy screwdriver at best. Useless, don't be fooled this is a poor man's makita and you can get much better for the price. I won't mention the battery as that's too obvious

Both batteries are faulty after light domestic use

The drill itself works fine but the batteries that are provided are poor quality. I've used the drill occasionally in a domestic setting. Both batteries won't charge and the charger suggests they are both faulty. You pay for a brand name and you should expect quality to last years. I now need to pay for new batteries which are half the price of the drill. Do yourself a favour a buy another brand, even the cheap brands could last longer. No response from customer service team at Makita. Also bad for the environment, where do I dispose of these batteries!? Worst tool I've ever purchased.

was great to start with

I have had this drill for a few years now it has done all I asked of it but now one battery has died and will no longer hold charge just waiting on the second one to do the same. The batteries never lasted that long on a full charge from the get go.You cant replace just the batteries as they are not compatable with any other Makita drills.it would seem this was made just for b&q.. so it is time to get a new drill. I would not buy this particular drill again spend the little bit extra and buy a makita with interchangable batteries or any other brand..

I bought this a few weeks ago to build a log cabin. Very impressed with battery life, no loss of power until last moment. Battery charges quickly and hold their charge well. Powerful and light to handle with great control. Excellent value fir money