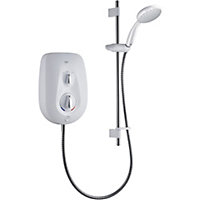 Mira electric showers are guaranteed to last longer and more efficiently. Their build-in heating system takes and passes water from your cold water supply and heats it. With our revolutionary Mira Clearscale™ technology, the build-up of limescale is also reduced.

I left a review previously for this shower. Fitted 13th Feb 2020 to replace another Mira that broke just a short time out of warranty.
Well, this one has today also broken. Just 13 months use. There are two of us in the household so 2 quick showers a day and it can't handle it
Unable to get through to Mira today so we are again stuck with having to wash (we have no bath) yet again until they can come out. Hopefully they won't have the cheek to charge me for a callout up front this time. Absolutely had enough of them and would never purchase another of their showers again

Fed up with Mira

I had this shower fitted by an electrician on 13th Feb and today, 15th March the hose has split and broken.
Since I had my new bathroom fitted out by B & Q in 2008 I have had 4 Mira showers. We previously had the Sport Air Boost however this time I just couldn't afford to replace. Mira came out previously and carried out a repair, then just over 2 years ago we had to replace again. 2 months out of warranty it broke. Mira came out and charged me £80, engineer didn't even remove the front cover to check it, told me it wasn't safe as it had the tiniest hairline crack on the cover. I had to take photo and zoom in to see this tiny crack
Anyway he was in and out quick enough so nice easy £80 I couldn't afford and no shower for me and my kids on the day of their father's funeral.
I didn't want to risk getting a different brand as I needed it to fit easy so bought this one over £100 cheaper than the Sport Air. It works ok in general although is noisy and the shower head is totally rubbish with only one setting that squirts everywhere.
However, I have just about had enough of wasting my money with Mira. I now have to purchase a new hose, quite frankly I cannot afford it and would expect it to last long than 4 weeks anyway. Expensive new shower, £130 for electrician to fit and now approx £20 for a hose. Still, better than the approx £400 Mira quoted me to replace themselves I guess, and that was on top of the £80 call out fee. Back to washing until I can stretch to another £20 for the hose.
Will never purchase Mira again and will look at having bath put in eventually and good old fashioned shower that fits on the taps.

Bought this to replace an aging Mira Sport 10.8.K.W. It isn’t as powerful as the Sport but still a very good shower. Before purchasing ensure wiring and circuit board will take support such a unit. Also be aware that although described as easy fit, a small connection joint was required. I am very pleased with shower and consider it excellent value for money, easy to operate, good pressure and temperature range.

Instructions to fit easy to follow
This shower was to replace an older Mira equivalent model, this shower seems more plastic & less hard wearing.The on/off button is quite large it has to pressed right in the middle of the button otherwise shower won’t stay on or turn off. only problem so far!

I bought this to replace a Tritan shower , very pleased with it , the price was very good as well.