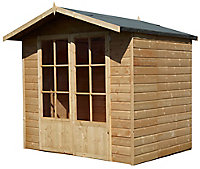 This Lumley 7x5 summerhouse with toughened glass is perfect for use as a summerhouse, workshop or extra storage space. With assembly service.

This summerhouse has been strongly constructed using 34x34mm framing

Easy to assemble, very pleased with end result, still to paint the inside.
Only additional expense was stronger roofing felt and paint.

This is a well made summerhouse however I cancelled the original order after waiting 7 weeks as I had so much trouble with Shires who manufacture and assemble these buildings.
Their customer service is absolutely diabolical and were not helpful at all, they did not return my calls in numerous occasions and would not listen to me the customer!
The dispute was over the base which I ordered with this package as I was mounting it on blocks raised off the ground and wanted a firmer construction when I confirmed that the area was ready the informed me that the base could only go on a "soft" surface of soil or lawn, nowhere in B&Qs description of this package is this mentioned. When I spoke to B&Q they said that Shires had not informed them of this and that is why it was not mentioned. The base is designed to go in soft ground as it has four metal spikes which sink in, I suggested not fitting the spikes and just laying the wooden base directly on the raised level blocks, simple one would have thought but Shire were adamant that this could not be done. So after getting nowhere with the girl on the end of the phone I said I would cancel the base and make up my own wooden base out of decking joists this also needed approval and that I had to send them image's of the base before they would install the summerhouse, my argument is that if I spend out money, time and effort they could still turn round and tell me the base was not suitable!!!
The only thing I could do was to cancel the order and reorder for delivery only as this was the easiest way of getting my summerhouse up this year and not next.