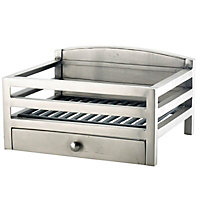 When my first order turned up and I opened the box the metal in patches was spilt and rusty. It looked like it had been left outside, to say I was shocked was an understatement. I had to take it back to store where they ordered me another one. There is a small patch of rust and a scratch on the front so the quality isn't great but for the price I've decided to keep it. Also it doesn't come with a tray underneath to catch the ash so need to get something that does.