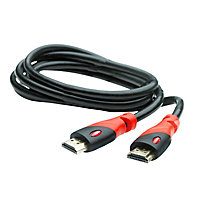 This Smartwares black 3000mm long HDMI lead is suitable for domestic use.

I bought this product less than 6 months ago and now its broken. I plugged this into my Xbox 360 so I could play in HD but after just a few weeks the product started to glitch the sound started to cut out randomly and it was really annoying, I thought that it was just our old TV so I continued to use it. about 1-2 months later i noticed that when i turned my Xbox 360 on the sign that told me what quality it was playing in had changed from 1080p to VGA? In an effort to fix this I pulled the HDMI cable out from the socket and looked at it. When I pulled it out the sockets Gold Coating had ripped off from the Cable and was still in the Xbox. I'm very shocked and disappointed as I paid a fair amount of money for what I believed to be a good make product.