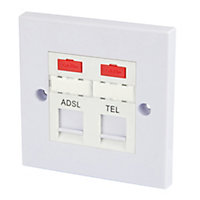 This flat screwed ADSL socket has 2 sockets and is shuttered for your safety. It's suitable for your telephone and data connections.

This product is completely useless due to the poor quality of the PCB. The copper traces are so thin, and so poorly attached to the board, that punching down the wires into the connector block (using a proper Krone tool) breaks the solder joints off the surface of the board. The flexing of the board also causes the connections to other components e.g. capacitors to break free.

I returned this to get a refund (after an argument because I didn't have the packaging!) and got another one hoping it was bad luck, and exactly the same thing happened. I tried resoldering the joints but the copper is so thin that even scraping of the insulation lacquer also takes off the copper from the board. The PCB is so flimsy and shoddy that even normal handling causes further breaks.

The second one is going back tomorrow - wish I had read the other reviews first but saw it on the shelf in store. The design itself is fine, and would be a good product if the PCB was properly made. As it is I would expect better quality electronics in a child's toy, let alone comms hardware.

I agree with a previous review

The overall quality of this product is very suspect. Please do not go to the hassle of using this. You can get a genuine Openreach faceplate for very little more and it will be a breeze to install. This was hit and miss with very poor quality contacts etc. Gave me a headache so I ordered an Openreach one and it took 5 mins to install and it worked perfectly.

This socket is complete junk - DO NOT PURCHASE. The manufacturing quality is extremely poor. If you attempt to connect the wires on the IDC connnector it will simply break the printed circuit connections on the PCB. Cost 9.98 - value 0.00. I was able to repair this product as I have the tools and knowledge but the average DIY'er would have no chance.