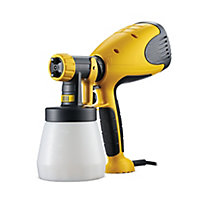 Brilliant product but downsides is the size of the pot, could of been bigger, kept having to refill every 5 mins and messy with dust affect, got EVERYWHERE.

Best piece of kit I have bought, ever!

well worth the money , make sure to use quality paint to get the best out of the machine

Easy to use and a great time saver

After spending about nine hours with a four inch fence brush to cover three quarters of my bottom fence ( it’s double boarded, twelve metres long and almost two metres high), and with another similar fence but twenty metres long still to go, I began to wish I hadn’t started at all. The thought of the amount of work left was of concern, so I started looking for something to make it easier. I read various reviews for different budget paint sprayers and the Wagner W100 had nothing worse than five and four star reviews on B&Q’s website, so decided to try one out. So pleased I did as this worked a treat. A piece that had taken three hours to paint with the brush was finished on the other side in just over an hour. It would have been quicker but I kept having to stop and move a protective cover to prevent any overspray coming through the other side. I used Cuprinol Ducksback which is quite thick and gloopy, but the instructions advised diluting by five to ten percent. I went with ten percent and it worked great. I had to refill the bottle three times but didn’t clean the sprayer out until I was finished. Cleaning was so easy as it all comes apart. Not sure how it would cope if trying to achieve a smoother finish for other applications, but highly recommended for rough sawn timber fences and sheds.