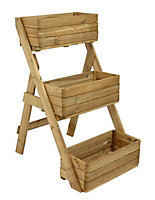 Grow flowers & cascade tomatoes or strawberries with this planter.

Attractive tiered planter, ideal for herbs and flowers and a great way to make a statement on your patio or by window.

Do not buy wooden planters from b&q they are rubbish, full of a glue substance which come out after a short time. We treated after buying and still it happened cannot get off and looks terrible, we have a lovely garden but the planters ruined every thing, would never go to b&q again.

This looks nice on the photos but when we got it home the quality was very poor, the building instructions are rubbish faded and very hard to follow.
There needs to be a bracket system for the legs and maybe pre drilled holes, if you not good at flat pack don't bother, it does look good once cleaned up and treated.

Our parents bought this as a surprise for us. They picked up one that was reduced in store and priced at £30, and I'd still say it was overpriced at that!
It came without fixtures/fittings or liners and had lost the instructions. It took 3 weeks to finally get instructions out of B&Q's suppliers (Forest Gardens) and even then they e-mailed me a really poor JPEG version of the instructions that I couldn't read.
The pieces come with no pilot holes so you effectively just get "cut wood" which isnt even of particularly high standard.
Avoid at all costs unless they reduce them to about £15...

I bought this as a gift and it is being used to grow tomatoes and chillies in. It looks great and is very sturdy once assembled. The assembly instructions are not as easy to follow as they could be, but it only took an afternoon to construct and set up. Pre drilled pilot holes would have made assembly easier as some of the screws were very hard to do up. If you plan to plant directly in the boxes, as we did, they will need lining as there are wide gaps between the slats at the base, we cut up an old ground sheet and stapled it in place.

Poor Build and over priced.

Item arrived totally flat packed with very poor instructions, you have to drill your own holes, so you are paying for cut wood and that is all. In my opinion you may as well make one yourself for a fraction of the price. When the item arrived parts were falling out as it comes banded, I found parts missing, wet moldy wood and broken parts. I would avoid buying this overpriced piece of rubbish at all costs.