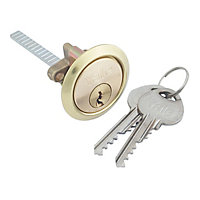 This 80mm rim cylinder lock features metal construction and is ideal as a replacement cylinder.

I was looking for a Chubb replacement but this name no longer holds outside US.
I went for the 6 pin for better security but found the screws were longer than would hold securely when replacing, so rather than saw them I re-used the old ones, which caused a slight problem.
Could have done with more keys, especially at this price, two is useless and when I had copies made the blanks weren't ideal but work if retracted slightly