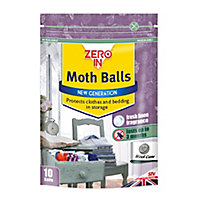 This pest control from Zero In kills moths, larvae and eggs. You should always read the manufacturers instructions before using this product.

After more than 55 years I’ve never had a problem with moths. I bought a cashmere jumper from M&S and after a month or so I had the opportunity if wearing it

So have thrown the jumper and placed these in my wardrobe

Not had a problem with moths before until one day there suddenly seemed to be quite a few in my bedroom at night. I tried to get rid of them, and hoped they would go by themselves but no such luck. They only appeared at night so options are limited.

Anyway I after a week or so I bought these as although I'm not scared of moths I was starting to worry about damage to my clothes. The 'balls' are actually small plastic bags with some chemical solid ingredient inside. These are are not the old style moth balls which are now illegal I believe. They don't smell the same.

I put the 10 'balls' around the bedroom I wondered if 10 was enough as I was trying to get one in every drawer and cupboard. But not to worry, that same evening I went to bed and hey presto, no more moths.

They do smell a bit when first taken out of the packet. It's not unpleasant and the smell seems to soon settle down.

Definitely recommended as a fast effective way to sort out a moth problem.