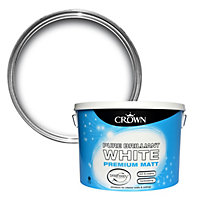 This emulsion paint is suitable for and covers up to 14 m² per litre on average.

At B&Q we want you to be satisfied with your colour selection. Not all monitors will display colours the same and paint tins may not show the same colour as your walls do in natural light. We therefore recommend you order a tester pot online or pop in store to pick one up so you are sure that this is the right colour for you.

So pleased with this low odour paint that I have bought another tub to paint other rooms in my house. Worth the extra money in order to reduce painting fumes.

Having been a painter & decorator for 32yrs I have used many matt paints especially dulux which I always used until I first used the crown equivalent here,I found the finish dries completely flat with no shine unlike the dulux version which although it is a matt finish seems to have a very slight sheen,this is a problem when touching up dirty marks etc or as I had recently where the ceiling was finished but in the centre I had to touch up an area that was marked,as it shows where you have touched up unlike the crown version as it has no sheen at all & touch ups don't show because of this, I have since switched to using this plus it's the same price & quality but with that added bonus & low odour

I purchased this paint, as it's supposed to be less chemical and no smell, it does smell, and continued to smell 4 days after painting the wall.

I bought this paint over a cheaper brand as I thought that the price would reflect the quality...I was wrong! It is terrible-the coverage is so poor id have to use at lest 4 coats to get it looking halfway decent. Im going to purchase a different brand and use what I have done as an undercoat. total waste of money. (the colour I was covering was a light pink/mink colour)