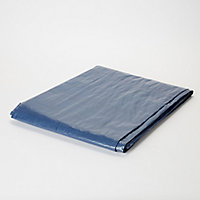 This multi-purpose tarpaulin is suitable for a variety of tasks at home and in the garden.  It is tough but light weight, easy to handle and resistant to water penetration. Ideal for protecting garden furniture, as a temporary roof cover, lining your car boot, as a camping shelter, ground sheet, log store cover and many more.

DO NOT BUY IF NEED IT TO BE WATERPROOF.
Not bad in other ways, used for three weeks and no tears, but is utterly useless to keep rain and damp out. i bought these thinking the rabbit hutches would be fine in all this rain but have learned to my cost that they are useless. It says weather proof but they are not waterproof.

Used it to cover a cat run but overnight 3 eyelets ripped .there would be more strength in a wet paper bag

Not waterproof, developed holes after a few days. If I hadn't trimmed it I'd have taken it back for a refund. Now I have more wet gear to replace. Waste of time and money.

No problems with Two I have

I've had the 5x4 tarp's regularly over the last 10 years or so, they have been fine for me - have one now which is at least 5 years old and isn't treated very well but still does it's job when needed.

It's not a premium product and for the price, I personally think they're good value.

As much use as a Kardashian

Bought this to temporary seal a shed roof until I could get around to doing a full repair. Couldn't understand why the inside of the shed was still flooding, despite having a tarp over it. Bought another bigger one thinking it was leaking around the sides somehow. Still leaked, the Titanic was more waterproof.
Would have been better off covering it with a bath towel, or toilet paper. This tarp is absolutely useless.
Can't leave less than one star, but gave it 3 for ease of use, lets face it, its not rocket science to put a tarp over anything, but alas, it does seem difficult to make a waterproof sheet actually waterproof.