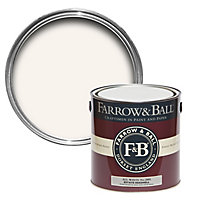 This All White no.2005 mid sheen estate eggshell paint has been specially designed to give a durable and long-lasting finish on a range of surfaces. Simply apply 2 coats with a brush, roller or spray and leave for 2 hours to dry - a great way to give the surfaces additional protection. Covers up to 30m² per 2.5 litres on average.

All White is just what it says! It contains no other pigment except white and creates the softest most sympathetic white with none of the uncomfortable cold blue feeling of a brilliant white. It is often used on woodwork and ceilings to bring out the colour in other soft whites like Dimity or Strong White or with stronger tones to create a fresh clean contrast. White & Light Tones.

10 years of using Farrow and ball..I have wood panelling throughout my home. I wouldn’t use anything else. Yes compare to delux and cheaper brands which this can not be compared to because it is made by totally paint geniuses! All white has totally no pigment at all which creates its superior whiteness. I have used their emulsion too for the same time frame and they are also the same. Comparing this to silicon well tbh It’s like comparing a Aston Martin to a KA

I was recommended Farrow and Ball by a friend but was a bit put off by the price.
It was the best decision I’ve made and ended up redoing my whole house.
The finish is amazing and very durable and actually stays white.

I've had a can of this since 2013 & it's still going strong, needs 2 coats as all f&b paints do but end result is brilliant! The paint sits really nicely after 2 coats & loses alot of the brush marks. I always use f&b now & feel it's worth the extra cost. I'm not knocking the previous review but I've also done stair spindles with it (in 2013) & they still look amazing today 7 years later!!

Dries far too quickly. I used it on spindles and found that if you put it on thinly it leaves lines but put it on more thickly and it dribbles down but you can't blend in the drips without scuffing the paint because its drying so quickly. I tried different brushes, I tried stirring it for ages, my husband had a go with it but always the same problems. We gave up after 2 spindles and returned it. I've had to re-sand the spindles that I used this paint on.
Also, it claims to be a 'soft, sympathetic' shade of white but I would describe it as stark white.

I have used this to paint our new coving and it's fantastic. It goes on beautifully, dries quickly and gives a wonderful finish. Can't recommend highly enough.