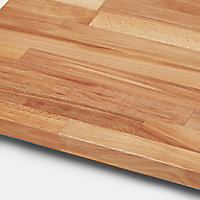 This GoodHome matt wood effect worktop from the Kava range is designed to be functional and easy to maintain. There are a wide range of options to suit your style and home, they also compliment the GoodHome doors and accessories that are available, making it easier than ever to create your own individual space.

The product that we received was black / rotten at some places . My husband had to sand it off . It also had gaps in between the pieces

Don't buy this product...
it looks lovely and our kitchen looks beautiful with the wooden worktops but the quality of the wood is very poor!

Within 3 months of having our kitchen fitted the worktop have started to warp there are large cracks in between the different cuts of wood. We followed the instructions to coat the wood with oil several times so it is not from water damage - the worktops are just very poor quality.

Product arrived well packaged, wrapped in plastic and cardboard appearing undamaged in any way. On opening the plastic wrap we noticed numerous periodic dents on both lengths of worktop on one side where it appeared the worktops had been badly stored. Both lengths have a long scratch along the edges. There are a number of small 'gouges' on both sides. One piece looked as though it had been cut with a sharp knife across one end. The wood is not marked as to which is top and which underside. The edges have slightly different bevels: one length was perfectly square on one edge with a small bevel on the other, the second piece had a larger bevel on one side and very small bevel on the other.

The worktops themselves seemed well made, neither length warped, very easy to cut and they take oil nicely on all sides. If they had been treated with a bit of care during storage/handling they could easily be 5 star. In the state they arrived they probably only deserve 1 star but we've given them 2 because they're adequate for the job we had: a small office space. I wouldn't have wanted them in my kitchen, they would have been returned.

NB: the narrative does not specifically state these are beech worktops, despite they are also included in the oak section of the website.

I bought 4 of these about 4 years ago. I’m just about to buy another one. I’ve been really happy with the look. They haven't warped or split.
They are not perfect but they’re cheap so what do you expect. Great value in my opinion.

This is not very good

This is not very good, I will not buy it again. The product was cracked from inside and out.