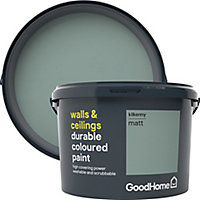 3 for 2 on coloured emulsion paint. Discount applied at checkout.

GoodHome walls and ceilings durable paint is suitable for walls, wood and metal with our toughest formulation and excellent covering power. It is extremely hard wearing so is ideal for hallways, stairwells and children's bedrooms.

Really happy with this purchase

Bought to do an accent wall to freshen up my living room. 1 coat covered really well, I would describe the colour as a teal green, people have commented how lovely it looks and my Dad, who is quite critical was surprise about the great coverage. So easy to apply.

This paint is great

Mom to many cats - 2 months ago

This paint is great quality, I didn’t have to give the walls a second coat it went up really well and has good coverage. I thought initially the colour looked similar to duck egg but when dry definitely more green than blue. Lovely colour

One coat all that’s needed

Bought 2x tubs for a bedroom.
On opening both tubs, found that the paint inside was badly mixed, very lumpy with hard lumps which would not remix. Pigment balls which would burst on the wall. Tried mixing the paint with a pain mixer on a drill, this did not solve the problem. Had to use anyway due to cv closures otherwise would have taken back for refund. After painting and picking out all the lumps from the wall the colour and coverage was good however.