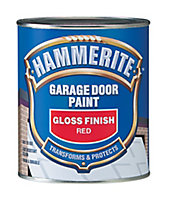 This Gloss red high sheen garage door paint has been specially designed to give a durable and long-lasting finish on a range of surfaces. Simply apply with a brush or roller and leave for 4-6 hours to dry - a great way to give the surfaces additional protection. Covers 7m² per litre on average.

So disappointed. what a load of rubbish!

Ok here's my problem....We decided it was time to repaint the garage door which was done with Chesnut and as there was some left in a pot from before I started to paint the door, ran out of paint half way down and thought No problem will get another one.....only this time the colour was chesnut brown! thought no problem it'll be fine....wrong again! was so thin AND a totally different colour......almost green/brown what a load of rubbish!. Ok, decided to change colour to the 'lovely' red....did one coat and again was so thin and hardly covered the green/brown so had to buy another pot as was running low . I thought the second coat would be ok but WRONG again it's still got the green/brown showing through!!....what a load of rubbish this is, wish I'd never started it. Don't waste your money on this. They appear to have changed the formula and it just doesn't do what it says on the tin!!

neighbours have remarked how great it looks on my garage doors

Avoid at all cost

Bought this because it was 'Hammerite'. Very thin, no covering power whatsoever,save your money and buy something else.