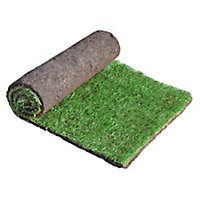 not very good quality turf - a lot of weeds visible when laid, more have come up since.

Worked ok for me!

This contains an unnecesary plastic mesh presumably to avoid having to wait for proper roots to form, shame on B&Q on unnecessary plastic use. Also makes it hard to cut

I brought this turf hoping to have a green lawn but within a week it was dead. It was poor quality with very thin layer of soil, so did not root in despite following guidelines for laying and watering as recomended. It was quite yellow to start with and became progressively worse until completely brown. I may have been unlucky and had a poor batch, but not good.