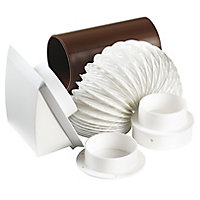 When venting steam it condenses, this moisture should flow along the floor of any outlet, however in their wisdom all the joins are against the flow! This will result in the moisture seeping out of the joints and into the wall. The unit is cheap against buying the parts individually and I will put sealant on the joins, but it is poorly designed overall.

The hose is far too short

Trying to fix an existing vent which was incorrectly installed. It turned out that the only bits I could use were the hose and the cable tie they give you to fix it to the outlet

Although a cable tie, for the most crucial link and the one I have been having trouble with, seemed a feeble fixing compared to all the screws etc for the rest of the kit, I was happy to go with it so I took the hose out of its packet in the box, attached it to the external tube with the cable clip, stretched it out... and discovered it was feebly short. Only good for someone who has the hole directly behind and near to the tumble dryer. So the only 2 bits of the kit that would work were useless as I can't dismantle the cable tie now.

The cowling on the outside won't prevent snails climbing into the hose so that's useless as well.

It's also true that the instructions aren't the greatest - printed on the box. If they wanted to have been more helpful, they could have related these to the letters that identified the parts on a different part of the box.

If I had known, I would have saved my £14 and bought some cable ties and a long hose for around £8 altogether.

Everything you need to vent a tumble dryer.

Purchased this kit to vent a tumble dryer through an outside wall. Everything you need is included apart from material to make good the wall if this is required. Even includes a vent hose which can be kept as a spare if one comes with the dryer. Used the on-line reserve and collect service as stocks were low and this made collection very easy.

Ok needed a ventilation kit to vent my dryer outside i have fitted a one brick type before on another property and originally wanted this type but found B&Q to only sell the parts individuality which would have cost me fortune so i opted for the above kit which is a good price and the quality is also good but i found the instructions on the box to be useless and once the kit was fitted there was no attachment supplied for the inside wall to put the dryer hose onto to get it to vent outside. in the end i had to use the parts for the tumble dryer outlet and old dryer connections i had lying around to bodge a inside wall connection for my dryer hose to fit too.

Overall i am very disappointed with this kit and will not be speaking very highly of B&Q for a long time.