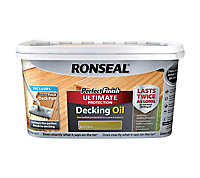 Revitalise and nourish your decking with this decking oil from Ronseal Simply apply using a deck pad and leave for 90 minutes to dry. Covers up to 8 m² per litre on average.

This Perfect Finish Oil includes a Perfect Finish pad and pole, everything you need in one pack. It'll help you get the job done fast, without the backache. It nourishes deep into your wood to stop it drying out and protects much longer than standard decking oils.

Did nothing it said on the tin.

I opted for this product because the applicator looked very handy to save the back and knees. The finish I got from it was disgraceful as the pile isn't deep enough to reach into the groves on the decking. The coverage with the applicator is also very uneven on flat surfaces. The oil itself applied with a brush is not bad but the claim that it covers 10 square meters with 2 coats is purely fiction. I had to buy another 2.5l to finish the job and when applied with a brush the finish is alright.

On opening container liquid seemed fine. Starting applying with applicator and had completed around 10 boards when realised I was getting large lumps of oil coming out on deck. I stopped and examined the remaining oil to discover a complete mass of gooey lumps impossible to mix. Tried my best to smooth out and continue due to consistency ran out. When looking back now realised deck had become two different colours. As I was using natural oil this was ridiculous as the first half was natural and second half was cream. Left to dry in hope all would even out but unfortunately it did not. Next day to to power wash the entire deck again. Never had this problem with rinses again but deck was such a mess I would never buy it again.

...bought this, 2.5 litres with applicator, for £40. The applicator was very easy to assemble but was useless at applying the product to the decking. The pile on the pad was way too short so was difficult to get into the grooves of the decking boards and it soon became compressed and clogged up, thus making it even shorter. The 2.5 litres just about covered the decking area (approximately 12sqm) but nowhere near enough to apply a second coat. Had to buy a second 2.5 litre tin to finish the job. This time bought the one without an applicator, for £6 less (again from B&Q). Applied the second coat by brush. This went on much better, although took a lot longer and was much harder work. It was worth it though, as this method also used about half as much of the product. I would recommend applying by brush. Forget about the applicator, it's rubbish! Also, don't buy at this price, I have since seen exactly the same thing online at less than £30 for 5 litres!!!!

good product, but it's a better finish with a brus

Just applied it for the second year.

Prepped with a pressure washer - which left the surface a little rough in places and patchy in colour. Did a bit of sanding until my knees hurt too much.

The oil evened out the colour and surface texture. Which is great.

I ditched the applicator for a 4inch brush. The brush worked much better. Harder on the knees/back with all the bending down, but much easier to get an even coat.

Even coating is the key to getting a good finish. If the oil pools in screw holes or foams when applied vigorously (or with a sponge) it looks a bit rubbish when dry.

Overall - great product, but get the basic tin without the applicator, then a couple of brushes and trays... as it's water based they can be washed and reused anyway.

Not enough in a tub!

Good finish, but the tub does not cover anywhere near as big an area as it says it should! Also the brush that comes with it is difficult to use and does not glide smoothly across the decking.