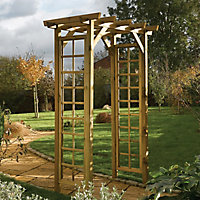 I had to do a lot of work to the individual parts first. For example the tongue and groove part of the trellis frame were protruding which would have prevented the frame fitting flush against the posts - I had to saw flat 2 corners of the frame!

I had to rehammer the slats together again, some slats were not even stapled / or the staple had missed the slats

In the main the staples were sunk into the wood, but there were quite a few that were stood proud and looked awful.

I would think for the price, that is he remedial work would not have to be necessary.

However I bought this as a memorial arch and had to get it built - so had to make the most of it.

The screws, I ditched for better quality ones as one bent too easily but I have plenty of wood screws in. They give you the bare minimum screws - worthy of investing in a handful of more screws as just using 4 screws in each corner of the trellis frame is not enough in my opinion.

The end result is satisfactory- I just don’t believe for the money spent that I should have to have done so much remedial work to get the quality to what should have arrived. This, I suggest is where quality control has failed.

Purchased this item end of 2017, very pleased not at all flimsy like some I have seen. secured with angle iron driven into the ground, easy to assemble would recommend.

The item was delivered quickly and was easy to put together.

This one will do the job.

We had been looking for a good substantial arch for some time and only came across this by chance. But it was the chance we had been looking for. Easy to assemble (I am not good at DIY) looks really good and should last forever, it is quite outstanding. You have no need to look any further.