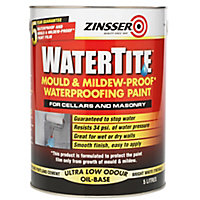 Ideal for masonry, this White matt waterproofing paint from the Watertite range by Zinsser has been specially designed to give a stunning finish to around your home. Simply apply and leave for 2-4 hours to dry - a great way to revamp your home. Covers 2 m² per litre on average.

it does what it says on the tin..

the handy one - 6 years ago

It does work, depends how bad the problem is, painted onto wall and concrete floor in kitchen have rising damp works well for over 3 years now but where damp was really bad it has started to break and pop in bubbles...mold washes off really easy. have to have my damp course done but this certainly helped a little if not a lot.

Had a Victorian basement which had been damp-proofed and nicely decorated about ten years ago. The damp-proofing had started to fail with damp patches appearing on the plaster. Having been advised it was probably only condensation (by an "expert"), I used a dehumidifyer to dry it out. Which it did do, but after a few days the damp patches returned in the same places, confirming the damp-proofing was failing. Rather than spend the estimated £5k to completely re-do the basement, I bought Watertite, being sure to apply it per the instructions, applying multiple coats. At first it seemed to work well, but unfortunately after about a week you could see small beads of water pushing through. To be fair, the product states it's limitations regarding the amount of hydrostatic pressure it can realistically be expected to hold back. However, not being an expert in hydrostatic pressure, it's not until you try it that you'll find out whether it will work for you or not.

Bought this product having read positive reviews.
We had a big problem with water coming through from our neighbours on our newly plasterboarded walls in our refurbished kitchen. This caused terrible mould which the damp company called 'cellar mould' and suggested we just tile over it. The smell was awful.
We removed the plasterboard from the epi centre of the damp which was coming from our neighbours and even after only one coat of Zinsser Watertight no damp was registering with our damp meter. It is now two weeks and no sign of mould which normally was back within a week after spraying with bleach. Our neighbour has promised to look behind his washing machine which hasn't been moved for twelve years so hopefully this will be the end of our problem.
I am also going to use it on salt stains which are appearing on a chimney breast before redecorating and am hopeful that will work better than the stain blockers/oil based paint we have used so far.
Doesn't smell too awful either and goes on smoothly.

Expensive but good - I hope!

It's very early days yet but I have high hope of this product on a damp garage wall. It's very easy to apply, but when buying bear in mind that you need to apply 2 coats of the product.

excellent product I used it last year on some penetrating damp I had failed to get rid of for 2 years. It stopped it dead not problem for 10 months so far.