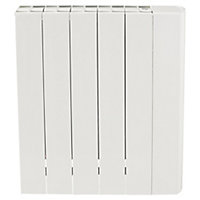 This electric radiator has a stone heating heart. The heater diffuses a soft heat which is maintained for a long time, helping you keep your home at a comfortable temperature.

The appliance keeps returning to Eco mode which means it heats all the time. Following instruction book is complicated and Eco mode won’t turn off.
Installing it onto the wall and hard wiring was easy in comparison to trying to program the heater.
Regret buying it now.

Just sits there silently and works.

It's around a year since I bought a 1kw model, and it has just sat there, maintaining the set temperature accurately and silently. And it looks good to my eyes.
Initial setup did fool me - when first installed, my room settled to 2°C below the set temperature, and it took me a while to realise that I had to set the temperature offset at -2 (how the room compared with the temperature setting) rather than +2 which I initially assumed incorrectly would boost the room temperature relative to that set.
There are lots of programming options, but I choose not to use them, having learned years ago that, surprisingly, maintaining a sensible constant temperature was the most efficient.

This product is great

Bought this in addition to two same type bigger sizes I had for a while (1500W and 2000W). Works great in a tiny bedroom of a well insulated wooden house. As opposed to convectors the ceramic insert gets heated and stores heat delivering gentle heat without sudden increase or drop when thermostat switches on/off. You just have to wait several minutes as it gets going. After it heats up they only use occasional pulses of electricity rather than take the electricity non-stop. There is a thermal capacity hence they are called inertia ceramic heaters. They are heavier than the convectors due to ceramic or natural stone like marble being fitted to provide thermal capacity. Easy to change temperature by simply pressing plus and minus and OK on a LCD controller. Easy to program, instructions provided. It is silent and odor free. Design is pleasing. External White aluminum will not burn skin. I did not hang it on the wall, instead I just fitted a U.K. plug and stood it on the floor of a room in my holiday summer home. Well calibrated thermostat really keeps desired 19 deg C day and night, as measured by a thermometer. It is not supplied with any legs nor wheels (only wall brackets) but it will stand. The external casing at the bottom is cool enough not to burn the floor. LCD could be backlit. If you need the “ON” light connect it via clock or spur with neon or LED. There is no ON light which I think is a bonus as it does not lit the room at night. It is a bit pricy but worth it as comfort is far superior in comparison to convectors heating the air directly with all the bad smell of burned dust they release or noisy blowers. I will be connecting it via wall electronic programmable heater clock (it does not have time programming, only temperature). It is too early to tell how much it will cost me to heat but probably the same as using old smelly convectors and noisy blowers which periodically overheat and underheat in between.

Firstly there is no paper template to aid fitting. Secondally the fitting guide does not tell you what the brackets attach to. Thirdly despite measuring accurately putting the radiator on the wall is hard, a good push was needed at the top and the small lock screws were too big for the pre drilled holes. No electrical rating information provided
Despite those side issues, the electrical installation was a breeze thanks to the availablility of a fused spur. Switched on and worked as described. Temperature control is simple push button affair with several settings pre programmed if you wish.
You do need a fused spur, 5 Amp fuse for 1KW output, if one isn't available you will need an electrician to install one from your consumer unit. Don't use a plug it says so in the instructions. Why no plug, simple - this device can be installed in a bathroom and you don't have plugs in bathrooms, that dosen't mean you can plug it in elsewhere - this is a permanent fitting.