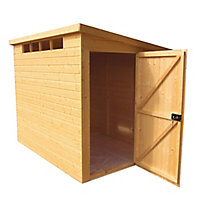 Not as secure as I thought it would be.

I bought this 13 months ago and have already left a poor review of this shed that has now been removed (strange) I had to fix the lock on properly myself and the workmanship of the shed was poor but now with the good weather we have had there are gaps appearing between one shiplap length and the next. All in all I wish I had not bought this.

I got the shed last week and me and my wife put it up ourselfs in a couple of hours .very easy assembly.im normally a fussy person about buying goods off the internet but I can not complain about this shed great value and a solid built shed

Good product well made, great value for the money. Would recommend to family and friends.

The shed arrived about 2 weeks after ordering. It arrives in 6 sections - floor, roof, and sides already built and ready to assemble, including the door already fitted with the lock assembly. It took about an hour to put together and I am very pleased with it.
I had a couple of small issues in assembly:-
1. the 80mm screws weren't long enough to screw the door panel to the side panel to the left of the door (in the photo) from the inside because there is already a double thickness of wood there. Some 100mm screws would be needed here. I fixed the two sections by screwing from the outside of the shed.
2. 80mm screws also aren't long enough to fix the roof panel from the sides due to the gap between the side and the roof edge. 100mm screws would be useful here too. In the end I attached the roof via 4 screws and the front and back corners through the corner trims.

Excellent shed,decided on this security one as it's better to be safe than sorry.
A friend and myself put it up in minutes, it was so simple as I had made a concrete base a few days before, would highly recommend this product to any prospective buyers.