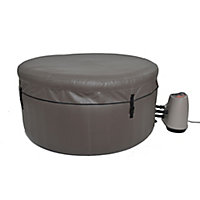 The Grand Rapids Plug and Play Portable Spa is the perfect way to indulge in luxury at home, on holiday or at parties.

The Grand Rapids Plug and Play Portable Spa is quick and easy to set up anywhere. Relax with 125 hydro-massaging jets and soothing aromatherapy scents. The Grand Rapids spa with comfortably seat up to four people. Just plug it in and enjoy your new portable spa.

I bought the Grand Rapids hot tub to replace a Lay Z Spa hot tub. The tub is fairly deep but its not that wide and think it would be uncomfortably close for 4 people to be in this tub at once! The filters are dearer than they are for Lay Z spas and the plastic seems to degrade on them despite not sitting in the tub. They are not the easiest to change either, it took about 10 seconds on the Lay Z Spa but it took my husband far longer on the Canadian because you have to switch off the electric to access the filter via the PCU , cap off the outlet and inlet in the tub and once you've changed the filter you have to purge which seems fiddly. The PCU doesn't have a lot of options unlike the Lay Z Spa , you can't switch off the heat and filter independently and there is no timer.
We had a fault (F2) on the PCU on day 2 which isn't even mentioned in the manual. I had to search on a facebook group to see that its a common fault. However the resolution doesn't always seem to the same, most say that you have to remove the sticker on the PCU and its a thermostat fault. Luckily we didn't need to resort to this and managed to get rid of the error.
I can't say I would recommend buying one of these, the best part of the tub is the liner which feels like better material than our previous tub.

Quality product and great fun for all !

Really good quality product. Fairly easy to set up. Takes a while to heat but that's to be expected. The jets are really good, loads of them and was much better than I expected really. Kids thoroughly enjoyed it and so did adults. Had a few technical questions which were niggling me and got a great helpful response off their Chat function on the Canadian Spa website, so very pleased with service.

Bought 1 week ago. Very impressed with the product - very robust and appears to retain the heat well when heating up and maintaining the set temperature. The customer support at Canadian Spa has been very helpful in getting used to operating and maintaining the correct water balance.

Good product but could use a couple of tweaks

Bought my tub last week after initial set up realized the pump unit was faulty, called Canadian spa who were superb had a new unit sent straight out. When it arrived and set up i found the main bladder had a leak in the outlet valve. Another call and a new one arrived at 9am the next morning. Normally i would have returned it and gone elsewhere but the service was second to none, i now have a fully working tub that works really well. Only thing i can see that could be better are the connector hoses they need better fittings on them. Would I recommend the tub......with the back up yes i would. Without this i would have taken it back