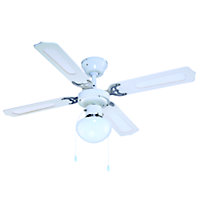 We purchased this fan to replace an existing fan in the conservatory - whch after 16 years stopped working. We measured the old fan and checked the dimension on the new fan in store - note from the front of the pack it appears to show that from the top of the fan to the fan blades is 43cm.

Following the instructions I fitted the fan motor and light fitting assembly to the ceiling. Fitting the fan blades to the motor housing after the motor / light fitting assembly is fixed to the ceiling is impossible, partilicularly with 'V' shaped roof, because the fan blades are screwed to the top of the motor housing and the restricted space makes it impossible to access the fixing screws.

Removing the fan motor and light fitting assembly from the ceiling and fitting the blades, means that a second person is required to hold the fan assembly as the electrical connections are made. This is when we discovered the problem that the fan blades were catching the ceiling, further investigation showed that the blades of the fan are only 18cm from the top of the ceiling fitting. We scratted around looking for a way to extend the tube to increase the distance between te ceiling and fan blades - nothing apparent. We then found a second drawing on the rear of the box that shows the overall height of the fan/light fitting is 43cm - there is no dimension for the distance between the ceiling fitting and the fan blades - MUCH CURSING! (The diagram on the front of the box is extremely misleading).

I had to make 5cm packing pieces to go between the fan motor and light fitting assembly to lower the height of the fan blades and stop them catching the ceiling.

The switch cords are very short and not labelled - (at 5ft tall my daughter could not reach them!). Cords had to be extended using cords from the old fan. When the cords are pulled to activate the fan or light, because the cords drape ove the edge of the lamp shade it has the effect of pulling the lamp / fan assembly to one side - not very satisfactory.

The other dissapointing feature is when the fan is switched on it starts at the highest speed - which is counter-intuative and the motor is not really quiet!

Overall dissappointing - at best it is functional - and looking at the quality of the build I doubt it will last anywhere near the 16 years of its predecessor!

Bought this for my Conservatory but when it was fitted we found the blades catch the plastic on high speed as it wobbles, it would be nice to have a second longer middle stem so it could be dropped down by about 100 to 150mm and you can't reach the pull cords I don't suppose I can get one of these, it will have to go back.