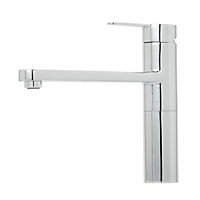 This Cooke and Lewis exclusive design features a simple and coordinated aesthetic, alongside integrated functions such as a handy swivel spout to ensure complete ease of use.

Leas after a couple of months

Bought the tap just before lock down at the beginning of the year and at first it looked good and work great. A couple of weeks into lockdown it started leaking when running hot water from the lever. I wasn't able to return the tap because of lockdown. wouldn't by another Cook and Lewis product after this tap.

Bought and fitted, within 6 months the tap started to split along the seam on the arch between mixer and water outlet. Design flaw or extremely poorly made, now to try and swap or obtain a refund...

I bought this tap because it is easily installable in the limited access under my kitchen sink. The conventional fixing of a single threaded retaining bar, which vertically holds the tap in place is not used here. I have great difficulty securing the conventional fixings so this tap appeared to be the perfect alternative. Unfortunately the water feeds are two unrestrained lengths of copper pipes running inside the height of the hollow body of the tap. The tap is secured to the sink with a single large threaded collar through the sink into the tap itself. Because the inner feeds are not fixed at the base they flex when the tap swivels to deliver water. The tap than springs back when released causing it to return to a more central position and not over the sink. It represents to be held in the required direction as the water flows. No matter how tightly the tap is fixed in place the swivel action springs back when released. Would not recommend this tap despite easy install design. The fault lies within the body of the tap’s design.