We remain open and here to help. Customer and colleague safety remains our priority. Whether shopping in-store or online, we urge you to follow the Government’s social distancing guidelines and to shop responsibly only for what is necessary. Online planning appointments are available at all stores. 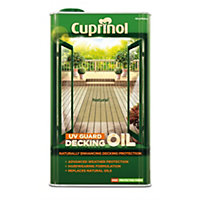 Revitalise and nourish your decking with this decking oil from Cuprinol Simply apply using a brush and leave for 6 hours to dry. Covers up to 8 m² per litre on average.

This decking oil & protector can be brushed or spray applied to penetrate deep into the wood, replacing the natural oils and resins that are lost during weathering. Its tinted formula enhances and revitalises the natural look of your decking.

Not oil.. water based instead.

Not oil.. water based instead.
I bought this as I wanted to oil my decking. But it's not oil, despite the big letters on the front saying so. While I'm sure it protects the wood it doesn't hydrate it like oil. It doesnt state it is water bassd anywhere on the tin or on the website, I rang the customer servce at cruprinol who argued it did stay on the tin it was water based so I should have known, less than helpful. The first tin I had was lumpy, apparently a common problem with this product. I bought the natural stuff very thin and a sort of milky custard colour but dries clear. Also by brush with 2 coats you'll get around 25m2 done not 40 as claimed

It does what it says it does! Amazing!!

I bought this over a month ago.. It's amazing the water droplets just sit on the decking it really does water proof the wood. decking is really expensive so I know it will last for years using this oil

Great product, very easy to apply and goes a Long way. Leaves a nice waterproof, waxy Feeling which is reassuring bearing in mind the reason and product I've bought it for. Bit pricey and I paid more for the 2nd tin I bought for some reason, however I went ahead with it based on the Performance of the first tin.

Bought this to winter proof a deck I built this summer, went on easily and smoothly with a 3inch brush, brought the wood back to almost original colour as hard just started to fade slightly, dried in hours. Only comment was that the instructions did not mention doing a second coat quickly after first as the first repels second. A mate said this was possible, but I have not tried yet after a couple of weeks as been rainy wet but first coat repelling water well. Time will tell if the product and instructions were good.